Getting started with React 16 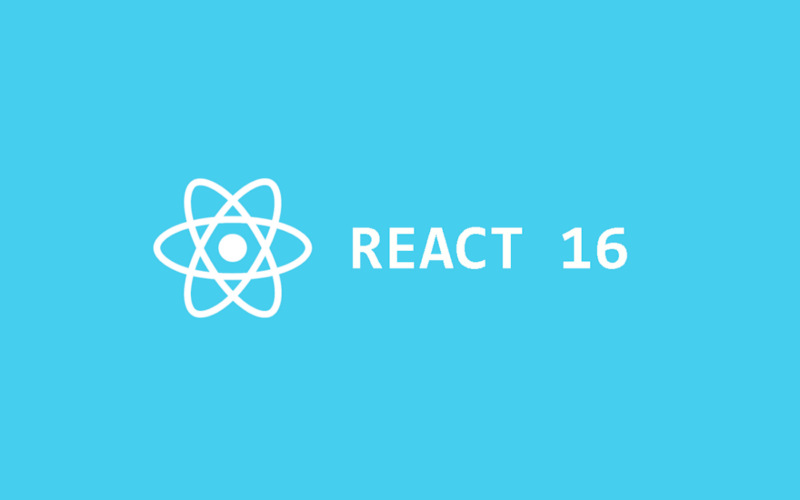 The new release has a lot of new features to facilitate the designing of robust components and enhancements to speed up the rendering pipeline.

React 16 is supposed to be completely backwards compatible with React 15. As stated in the official React 16 blog post -

React 16 also ships with the new MIT license. If you haven't followed the news as to why the React team has switched to the new license, be sure to read this article.

Talking about it's stability, the React team has been serving the production build of React 16 to Facebook and Messenger. Despite the new feature additions, it is 32% lesser in size as compared to the previous release.

Now without wasting any more time, let's talk about the features of React 16.

React 16 gives you the ability to return elements in an array from the render method.

That means, for the most part, you wont be required to perform mapping of array elements inside your render methods. Simply return the array and it'll render just fine.

The only downside here is that it still expects a key value to be added to every array element in order to work.

I feel it's not that big of an issue, plus the React team has assured that the future release of React will most probably have this requirement removed.

Even strings and numbers can be returned from the render method now.

Previous versions of React used to throw this error -

As you can see, only valid React elements were allowed to be returned from the render method.

With React 16, the render method can return -

Strings and numbers are rendered as regular text nodes in the DOM, and as you would've guessed, null renders nothing.

UPDATE : React 16.2 was released on November 28th, which has improved support for returning multiple children (aka Fragment) from a component's render method. More info on the same can be found on the official blog post.

Error Boundaries help you to catch run time errors in your app and allow you to render a fallback UI.

When an error occurred, previous versions of React used to leave your app in a broken state. In order to tackle this, React 16 provides a brand new lifecycle hook called componentDidCatch, which helps you to catch run time errors.

Error Boundaries capture errors inside their subtree, which means if an error occurs in any of the child components within that Error Boundary, then the componentDidCatch lifecycle method of that particular Error Boundary will fire.

componentDidCatch returns two parameters - an error object which gives you the stack trace, and an info object, which gives the component stack data.

Errors in all lifecycle methods can be caught by an Error Boundary, including the constructor method.

An Error Boundary cannot catch an error within itself.

In the above example, when an error is thrown in the Child component (line no 17), the componentDidCatch lifecycle method of the Parent component fires (line no 33). Based on that, we change the state and render a fallback UI in it's place (line no 38).

What happens when an error occurs ?

Once an error occurs, error stack trace and component stack data are logged to the console, and the component tree is unmounted from the root. This prevents from showing corrupted data to the user. 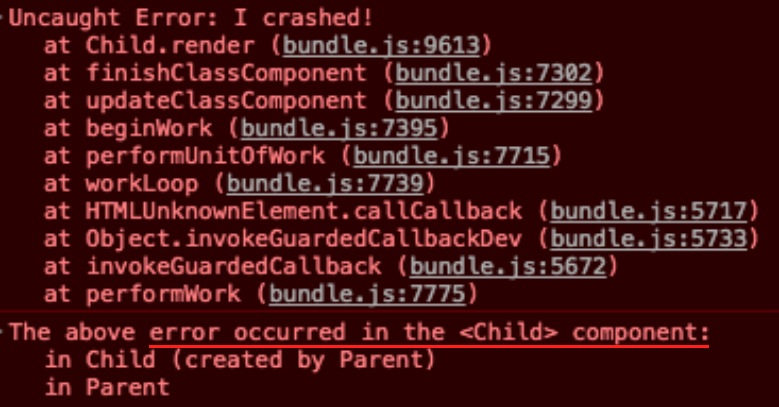 But is there really a need to unmount the whole React component tree ? Well, the React team has debated this decision, and in their experience it is worse to leave corrupted UI in place than to completely remove it. Read more about it here.

Portals let you render or teleport a child node into a different DOM node hierarchy.

The first argument passed to a portal is a child component, which is any renderable entity (what the render method supports) and a DOM node, to which the child is mounted.

Portals can typically be used to render hovercards or modals, where the content is to be shown in a visually different and non-contained fashion, out of it's parent.

The above illustration shows the process of creating a portal in order to render a Text component from DOM hierarchy 1, into DOM hierarchy 2 via the modal node.

The Modal component creates a portal which mounts the Text component to a different DOM hierarchy.

Here's the code for the above example -

Event Bubbling in Portals works the same way as it does for normal React components regardless of it's position in the DOM tree.

In this case, the button in the Modal component has no onClick handler, so once a user clicks on that button, the event propagates to it's ancestor in the component tree, and the onClick handler of that component fires.

With React 16, you can pass custom attributes to your React components.

In the past, React used to ignore unknown DOM attributes. If you wrote JSX with an attribute that React doesn't recognize, React would just skip it. But React 16 allows them to be added to the component.

Previous versions of React used to have an attributes whitelist, which contained a list of attributes that React can recognize and allow them to be added to components.

React 16 gets rid of this, so there's no more attribute matching with the whitelist resulting in smaller file sizes.

Custom attributes are handy if you need to use a non-standard attribute, or if you need to integrate with a third-party library that relies on such attributes. Just like before, React 16 also lets you use data- and aria- attributes with your components.

The new core algorithm is completely backwards compatible and is based on a priority scheduling system. Events are streamed based on priority and are scheduled to be rendered by the browser, and this method does not block the main thread.

The scheduling system makes heavy use of the requestIdleCallback API.

This method queues a function to be called during a browser's idle periods. This enables developers to perform background and low priority work on the main event loop, without impacting latency-critical events such as animation and input response.

In browsers where this API is not supported, React provides a polyfill.

If you want to know more about how Fiber works, I would definitely recommend you to check out this talk by Lin Clark, or read about the details in this blog post by the React team.

The server-side renderer in React 16 has also been re-written. It is said to be 3x faster.

It provides faster streaming of components down the wire, to the client.

The new packaging strategy (which is facilitated by the Rollup module bundler) gets rid of process.env checks, which are really slow.

React 16 supports streaming of components via the new renderToNodeStream API. Feel free to check out the documentation of ReactDOMServer for more details. 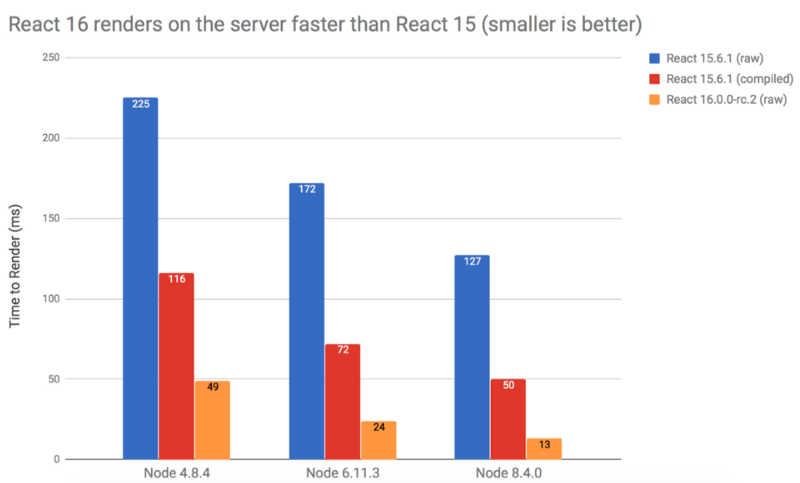 Despite all the new feature additions, React 16 is actually smaller as compared to 15.6.1!

The size difference is partly attributable to a change in packaging. React now uses Rollup to create flat bundles for each of it's different target formats, resulting in both size and runtime performance wins.

You can get started with React 16 right away, it's available on NPM and Yarn.

I also presented a talk on React 16 sometime back, you can check out the deck here, which was retweeted by Dan Abramov as well.

That's it for now! If you have any questions or suggestions, don't forget to leave a comment down below. Also, feel free to say hi 👋 to me on Twitter and Github.